I laid out the jig on top of a full size drawing of the fuselage using wooden blocks. The same method as I used in the building of the wing ribs 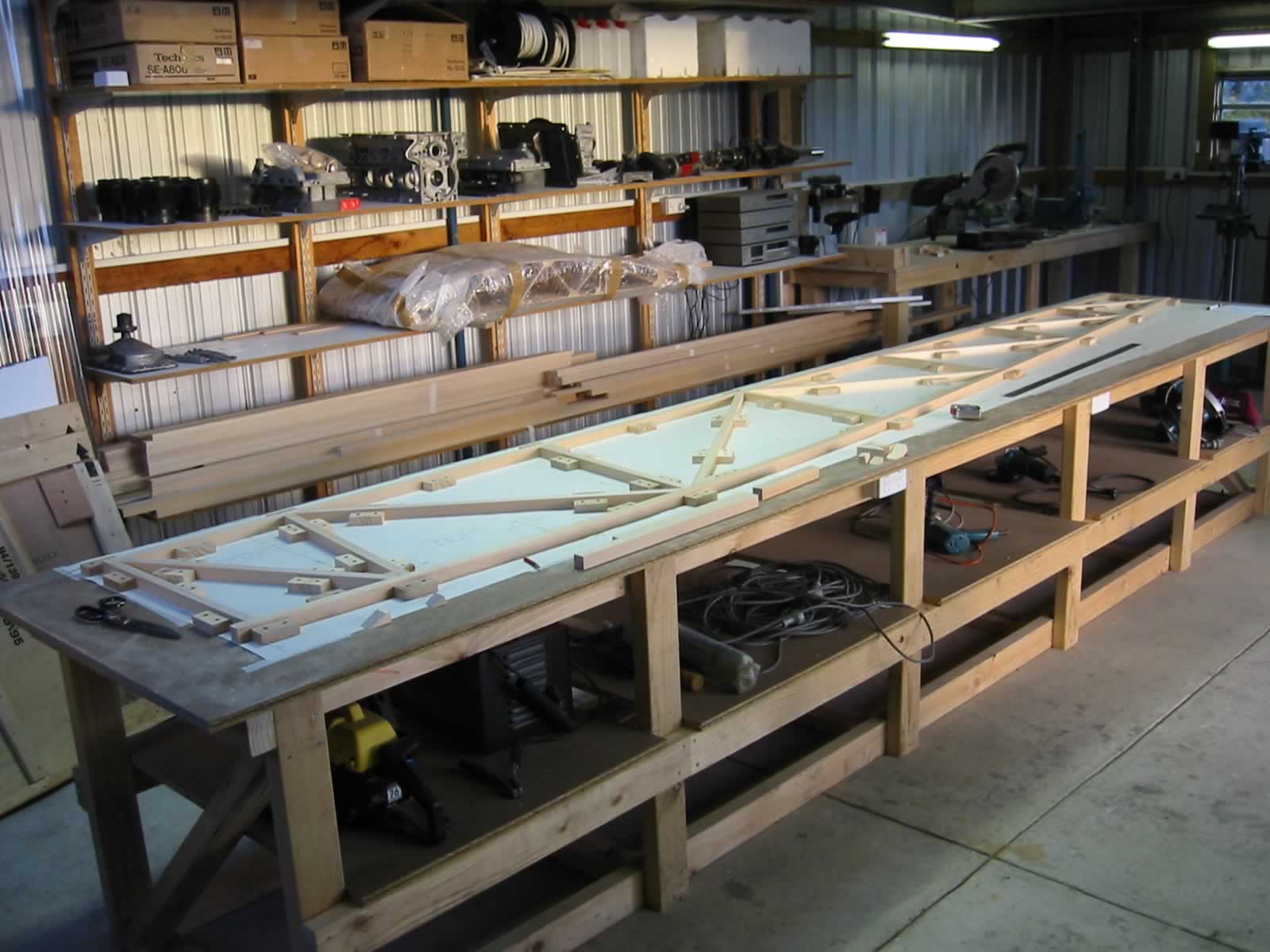 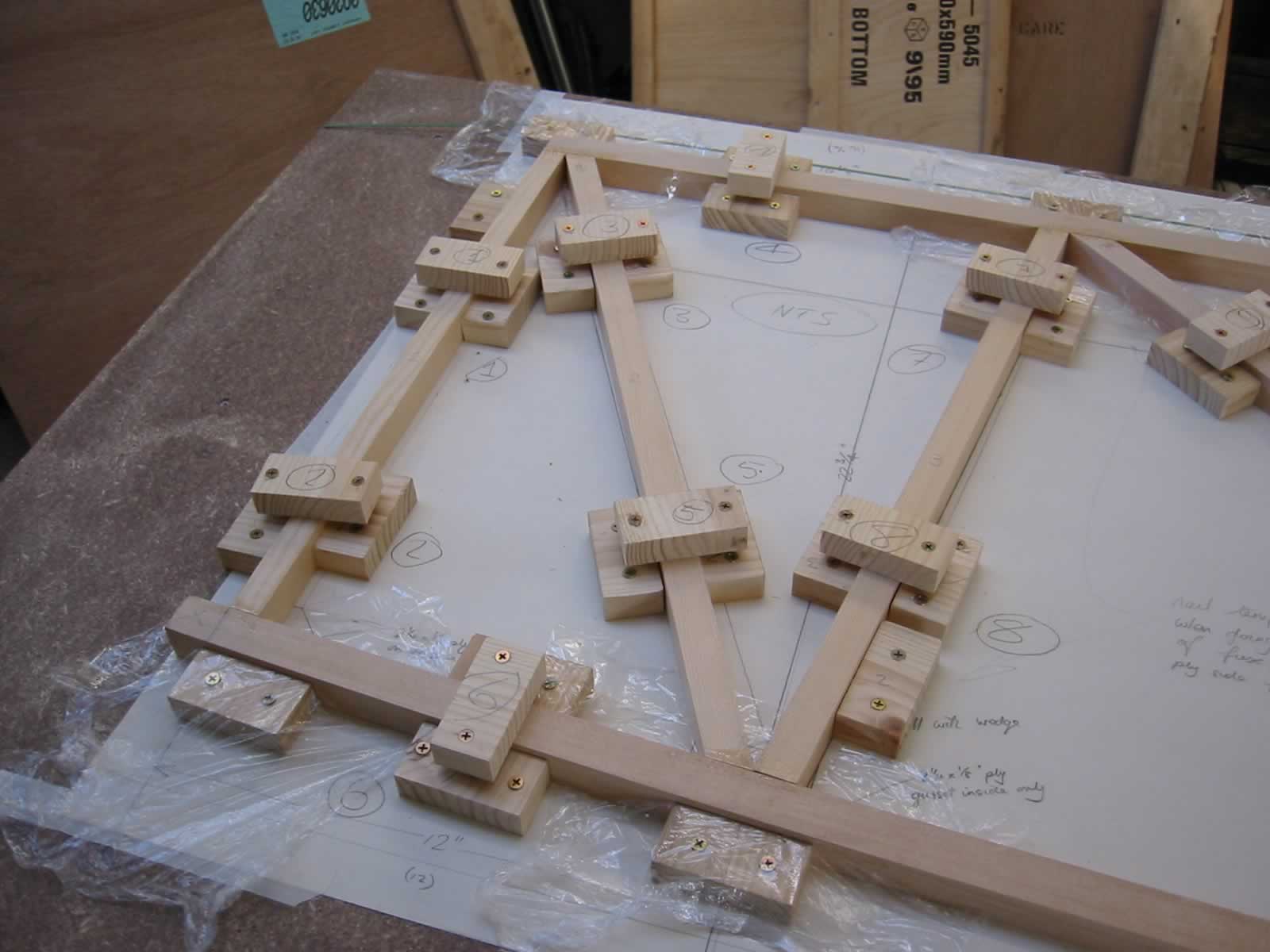 I glued this side up without the gussets because the plywood had not yet arrived. When the glue had set I removed the side from the jig and repeated the process with the other side 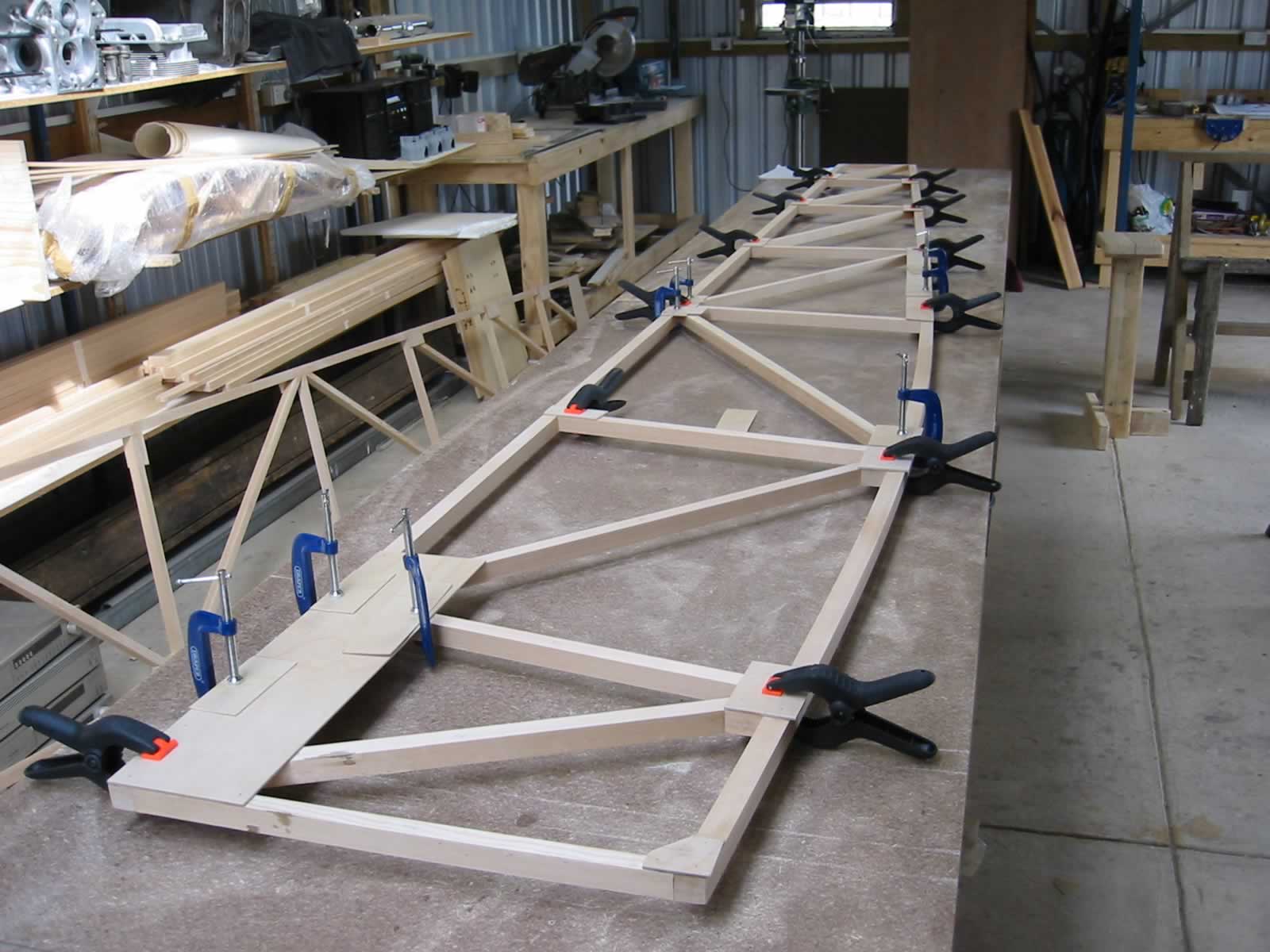 After the arrival of the plywood I glued and nailed the gussets. The nails were just to hold the gussets in place whilst the glue dried. When the glue was dry I pre-shaped the tailpost using the dimensions obtained from a Visio drawing 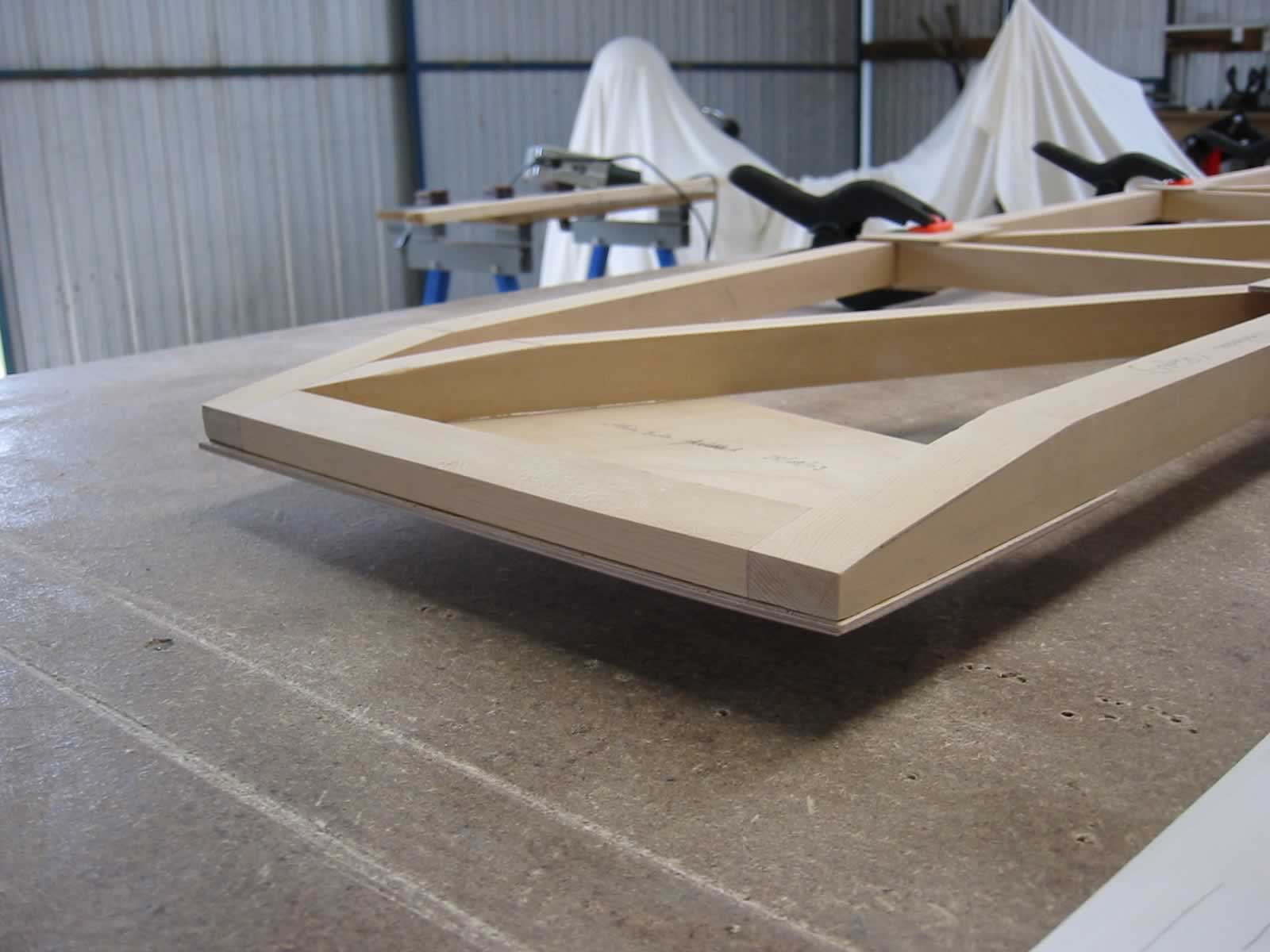 The next challenge was to glue the fuselage sides together. I laid out raised blocks at the strut positions of the top longerons (the fuselage is joined upside down) 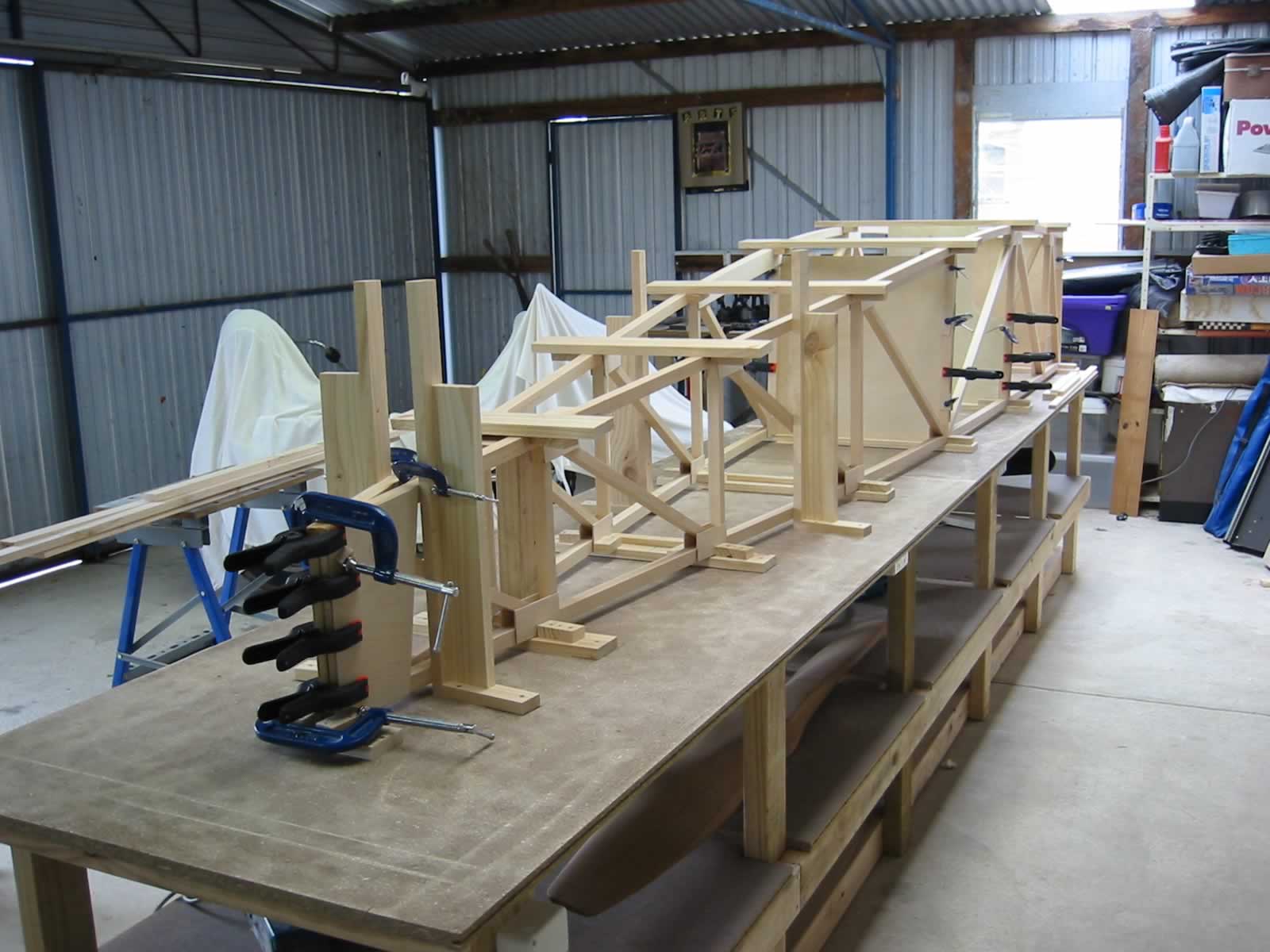 These were set around a center line on the table. I also built up another set of the raised blocks to fit the top side of the fuselage when the fuselage sides were fitted into the bottom set of blocks. I made up a temporary firewall and squared up the fuse sides to it using G clamps. The fuse sides were fitted into the raised blocks. Some positions required inside blocks as well to stop the fuselage form becoming too narrow at that point. Two additional blocks were fitted top and bottom in the 24 inch section to stop the fuselage bowing out when the tail was pulled together. I also made up some temporary squares. These were screwed to the table and clamped to the upper longeron to maintain the square of the fuselage sides. With the fuselage now in its final position and with the firewall and both seat back positions checked diagonally for square, I made up the seat backs from plywood. I also glued the ½” x 1” spruce to the front of the front seat. I glued both seat backs to the upright braces and left overnight to dry 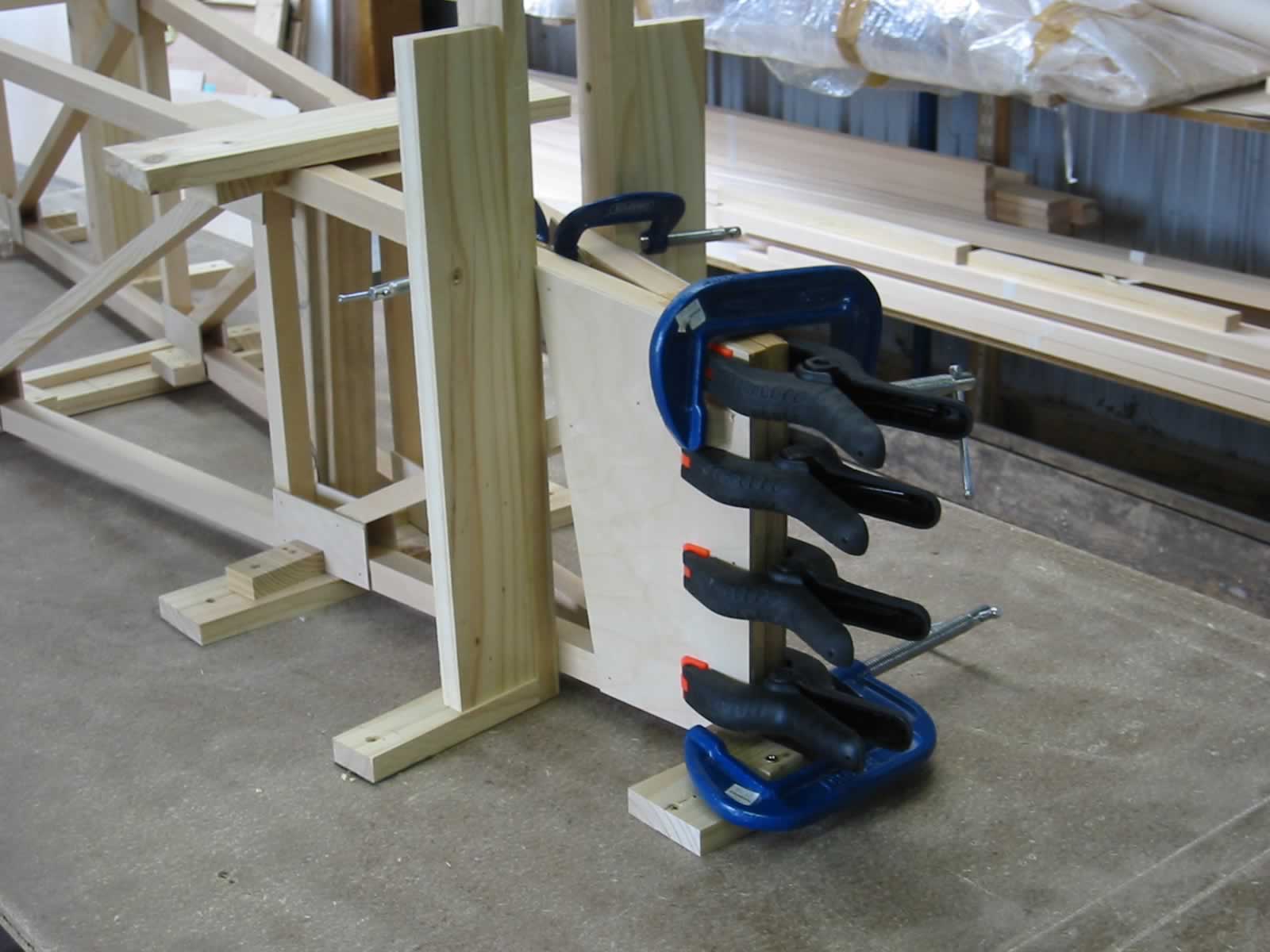 Next day I fitted all the horizontal braces and glued up the tail post, again checking everything for square. Next were the cross braces and the front stiffener 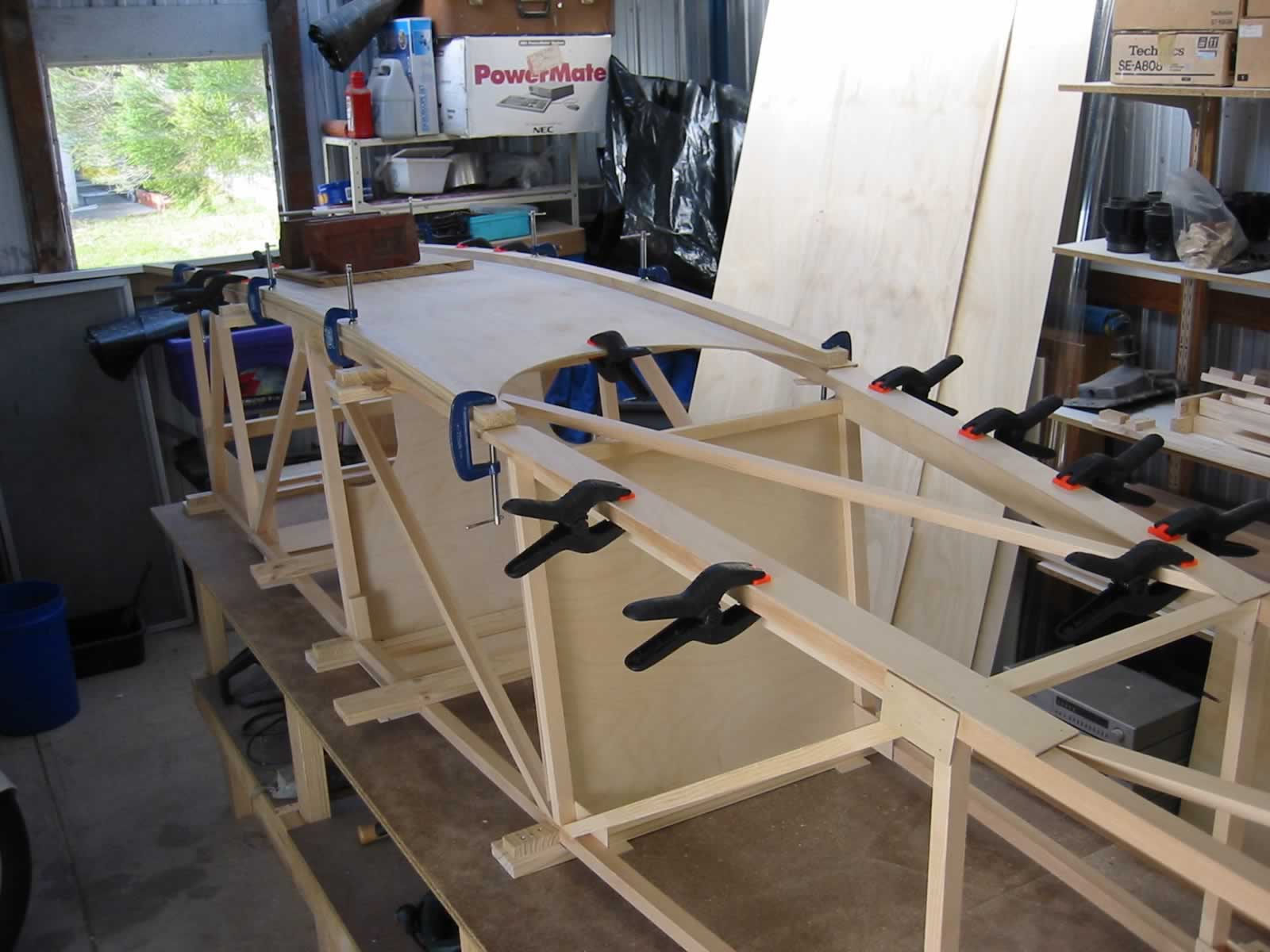 After everything was dry I cut and fitted the floor, the rear gussets and the rear stiffener braces.

When dry I removed all the raised blocks and turned the fuselage over. I then installed the top cross braces and the seat back top braces. I left the raised blocks in place in the 24 inch section while the stiffeners were fitted and set 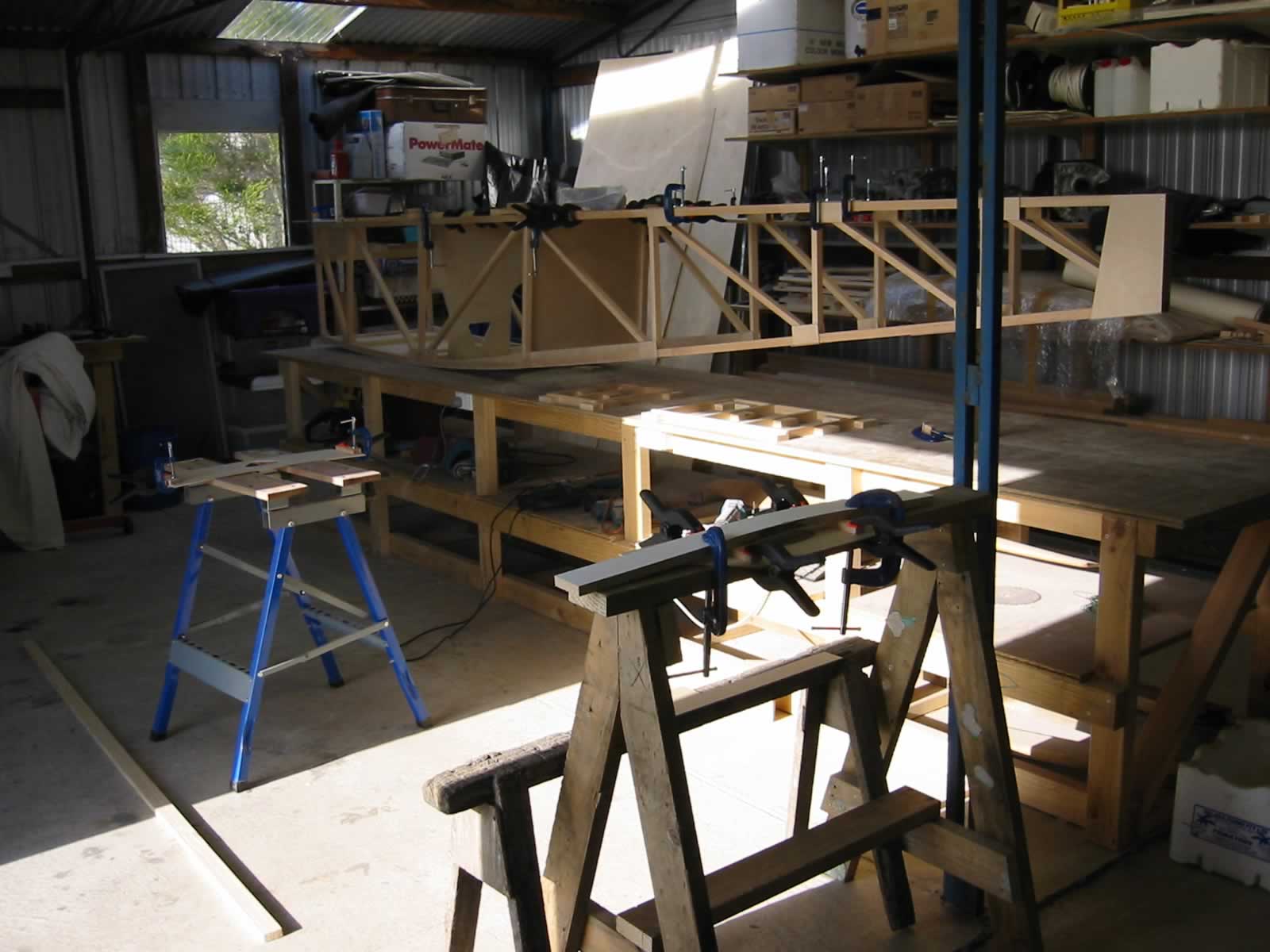 Next I finished off the stiffeners and the rear gussets.

The seats, turtle deck and instrument panels are next. 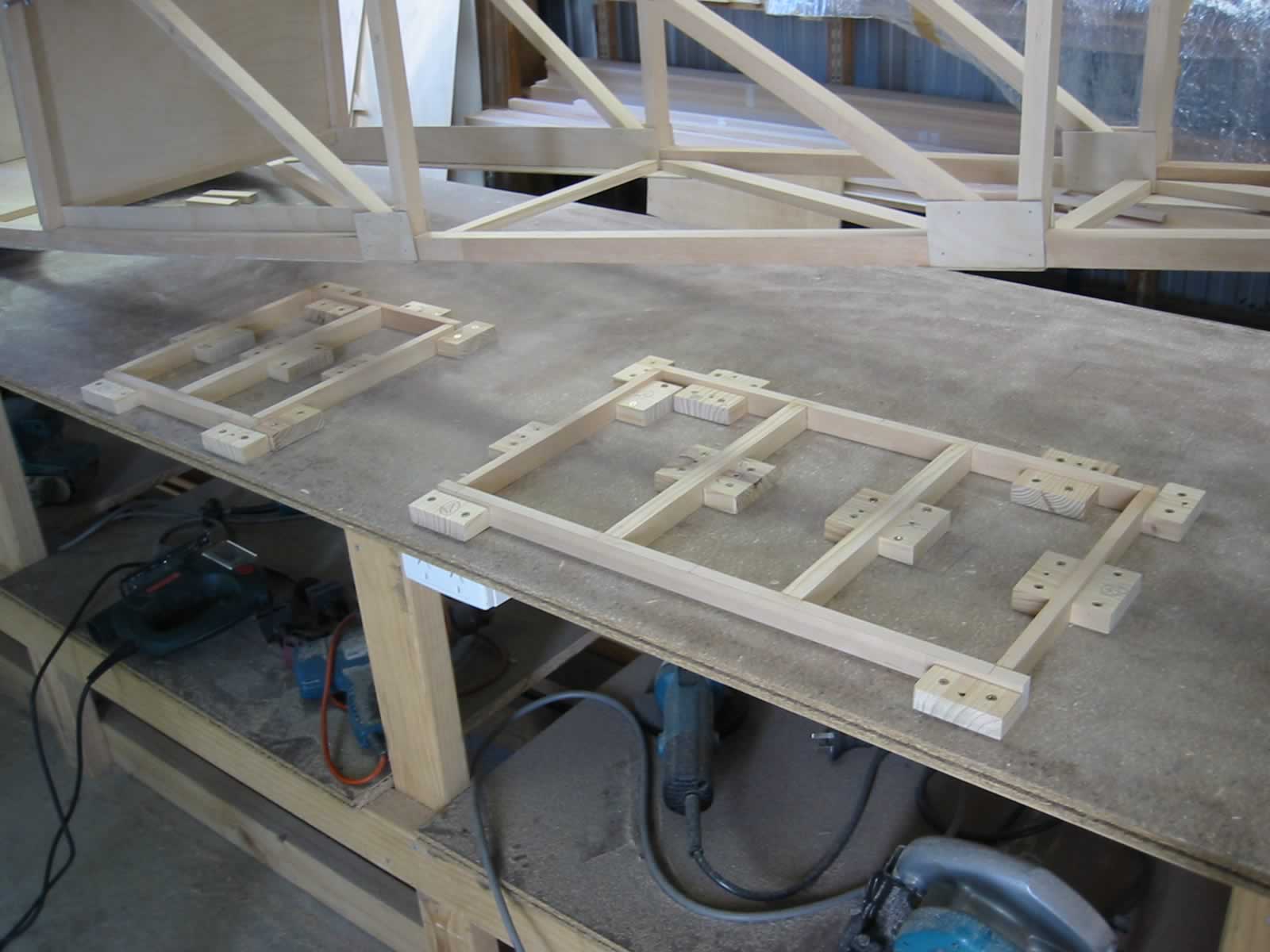 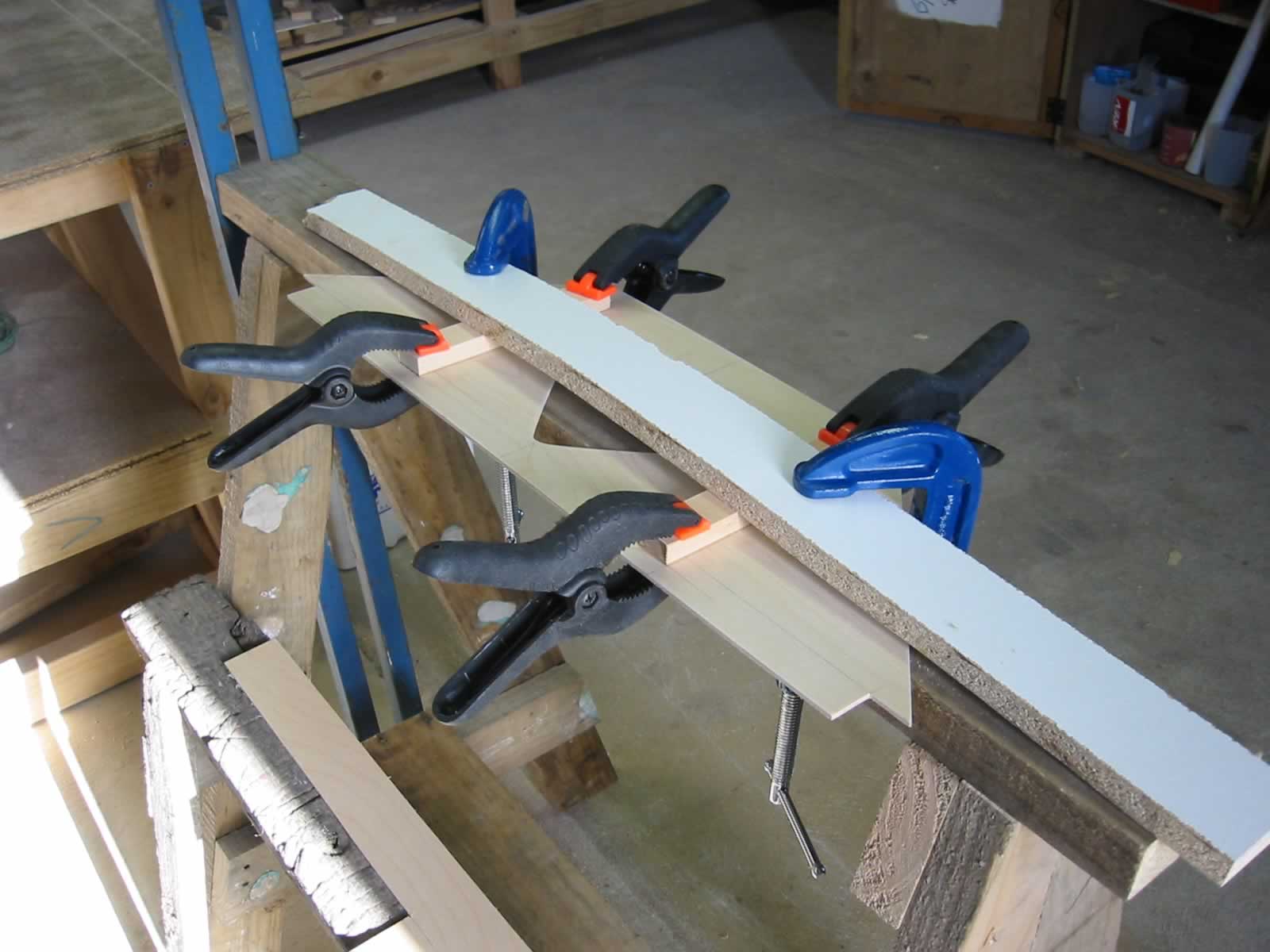 and the front seat base being glued.

I decided to make the turtle deck height the same as the cowling covers. This meant I had to work out the dimensions of the stringer supports. I again used Visio to produce a drawing of the four supports. 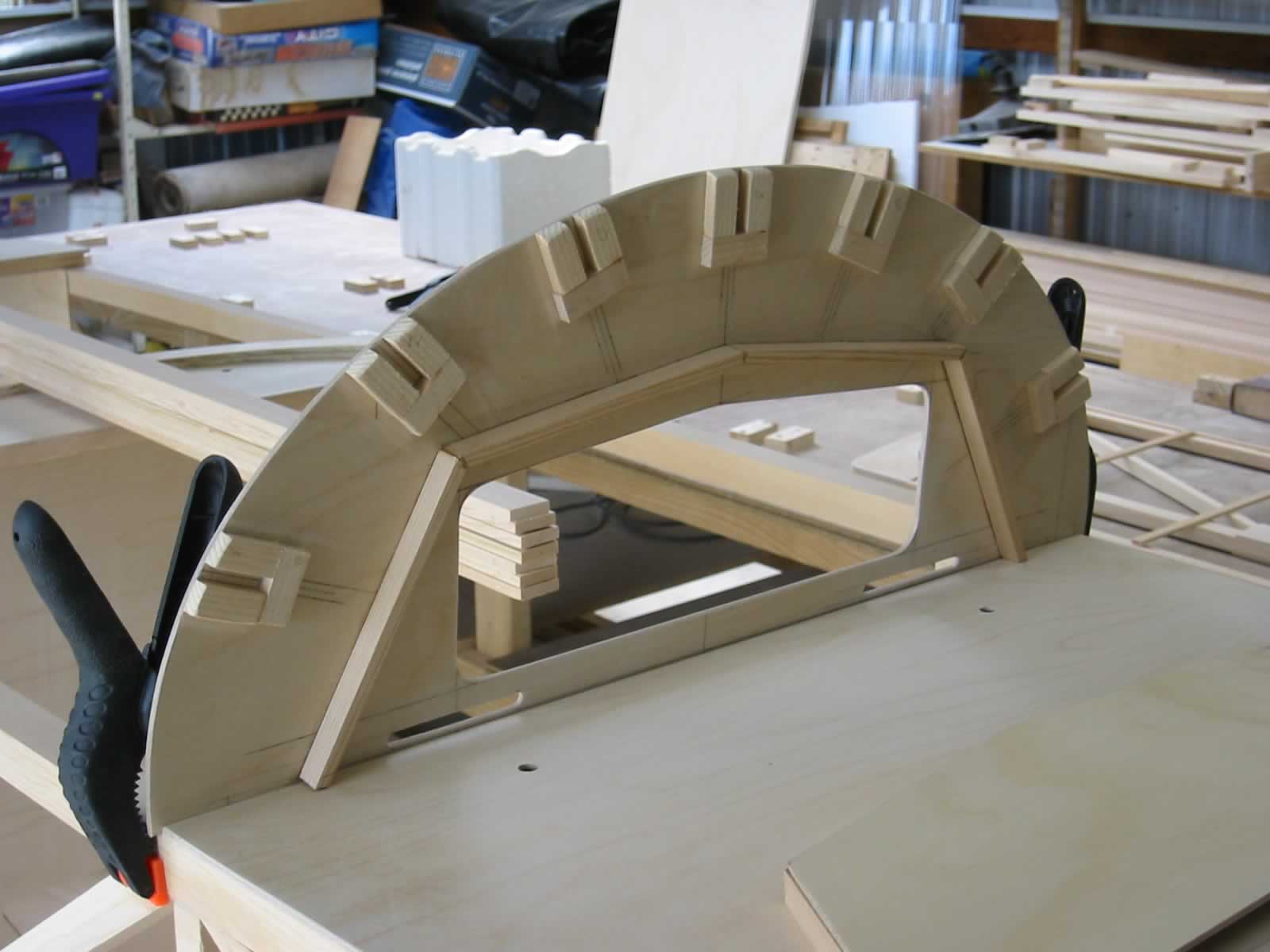 I glued some 1/2″ x 1/4″ spruce to the rear of the seat back/helmet box to hold the turtle deck stringers. Note the shoulder harness fixing bolt holes 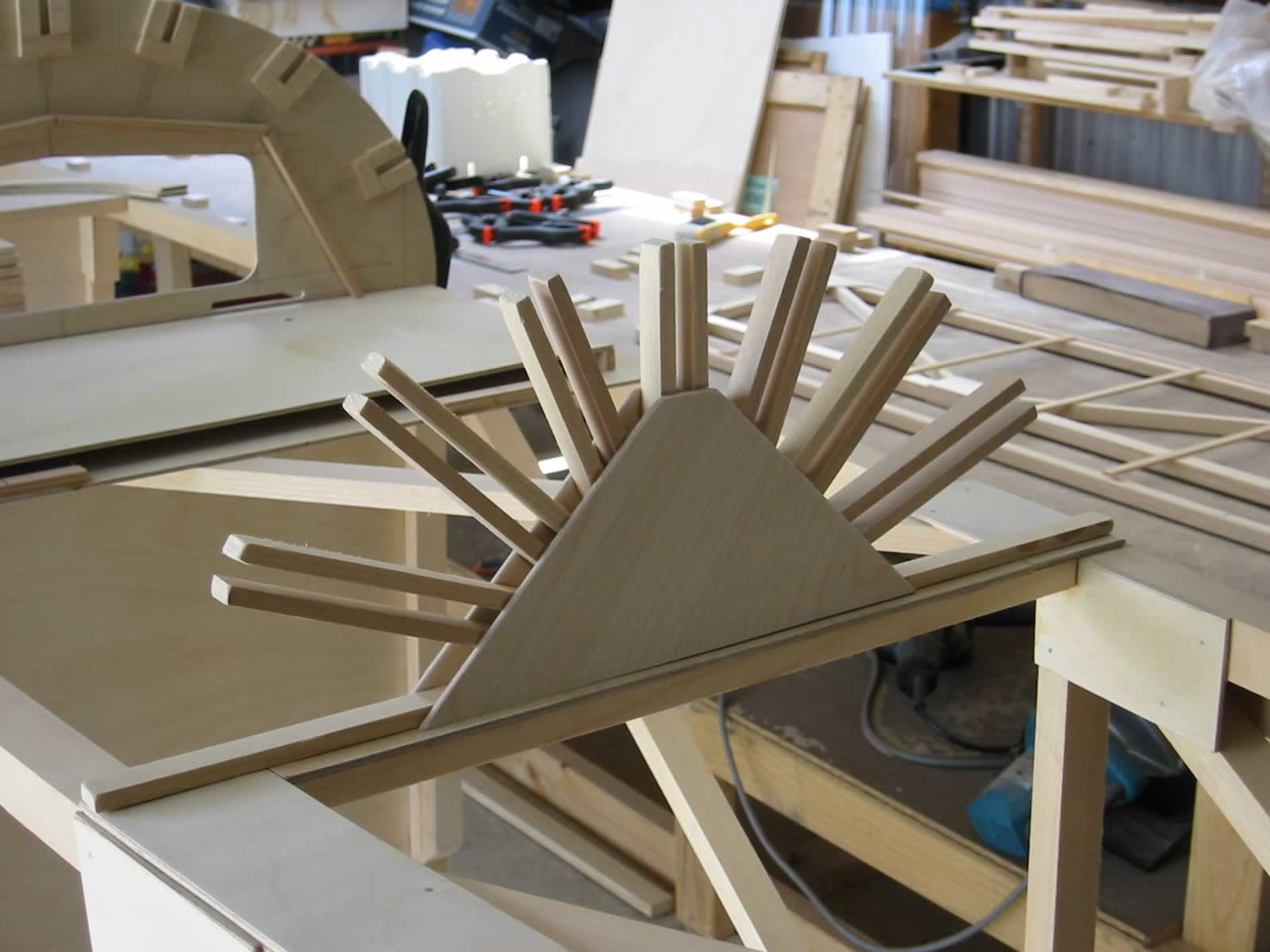 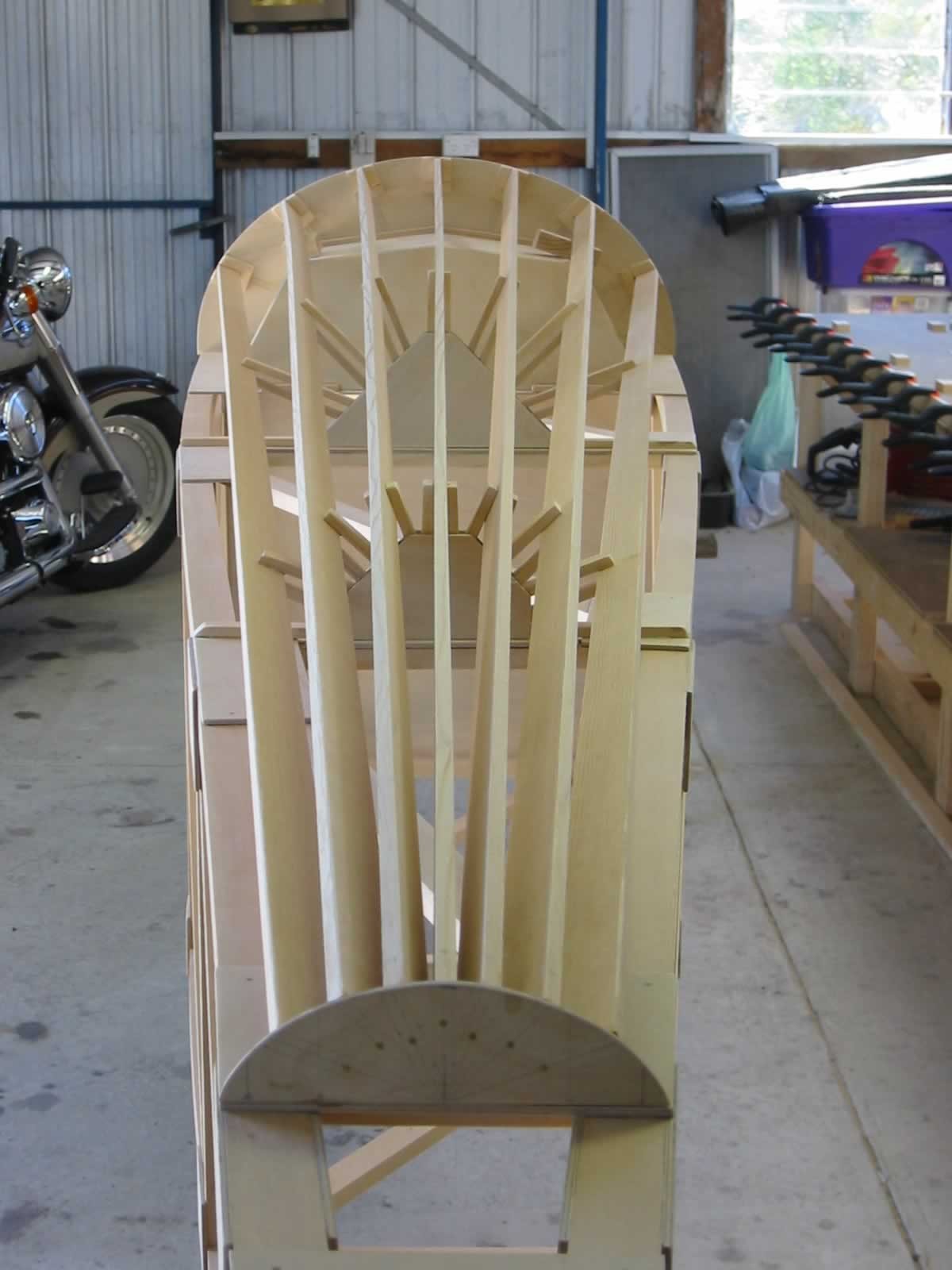 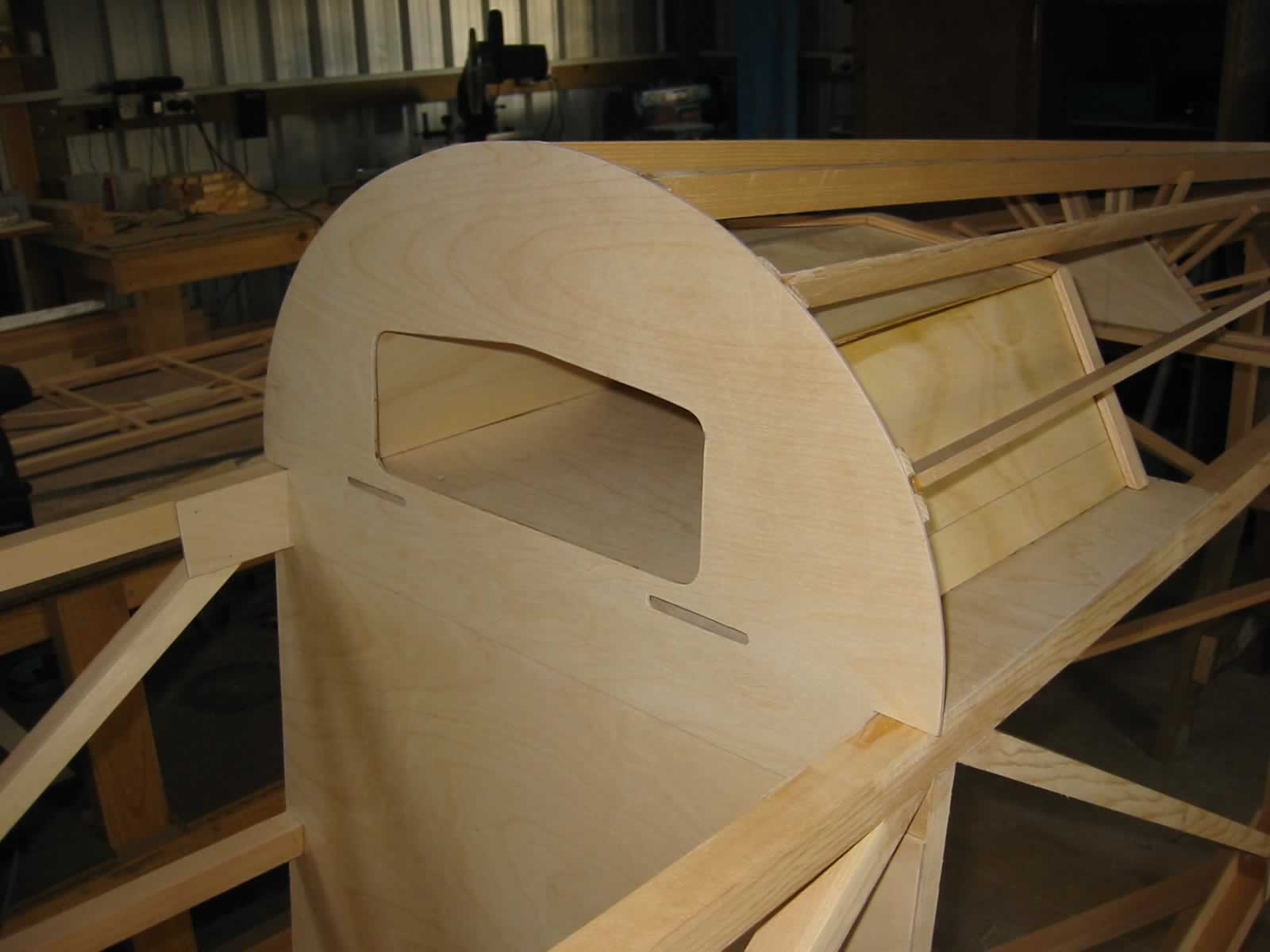 I also installed the helmet box sides. The slots in front are for the shoulder harness 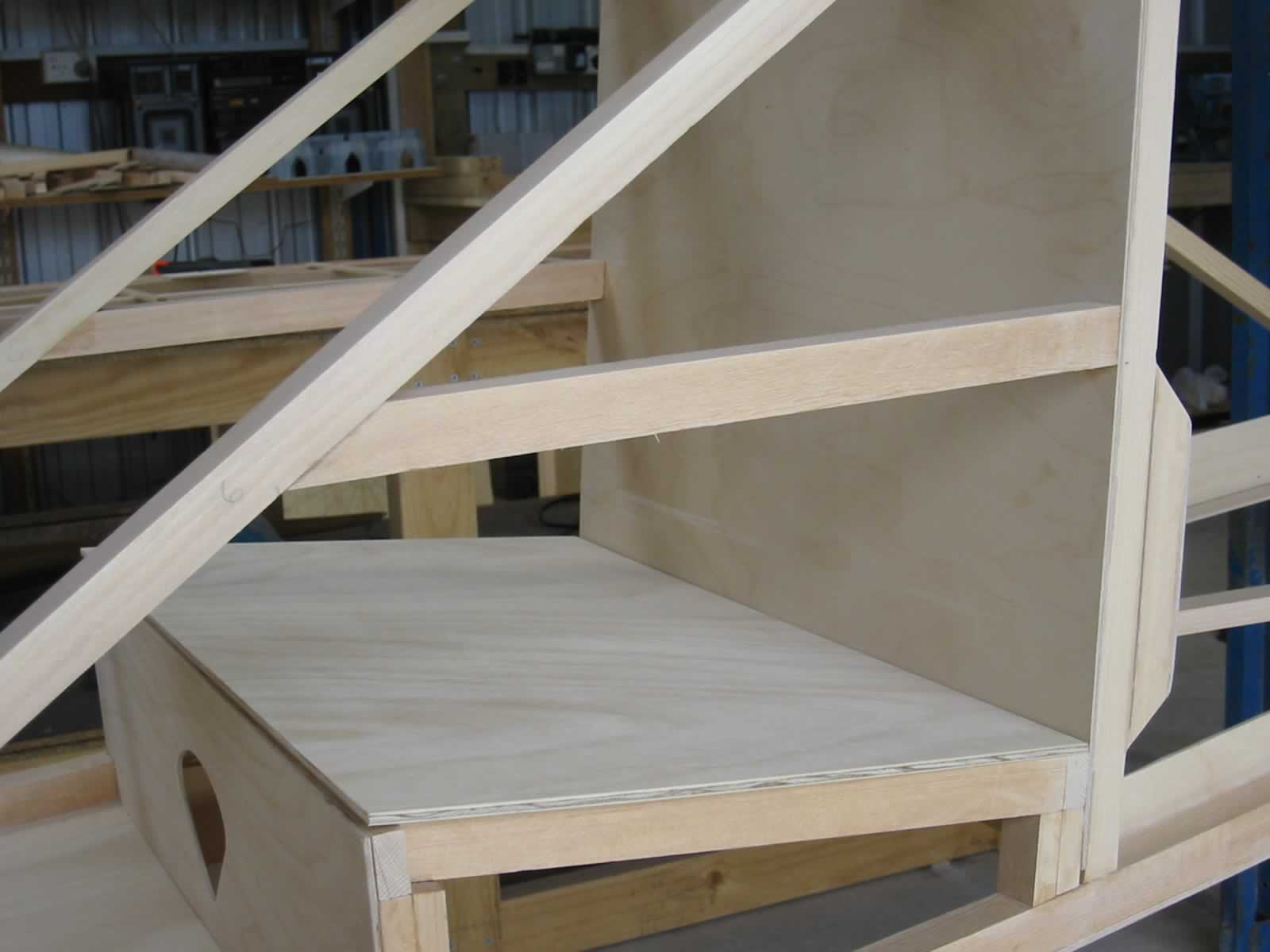 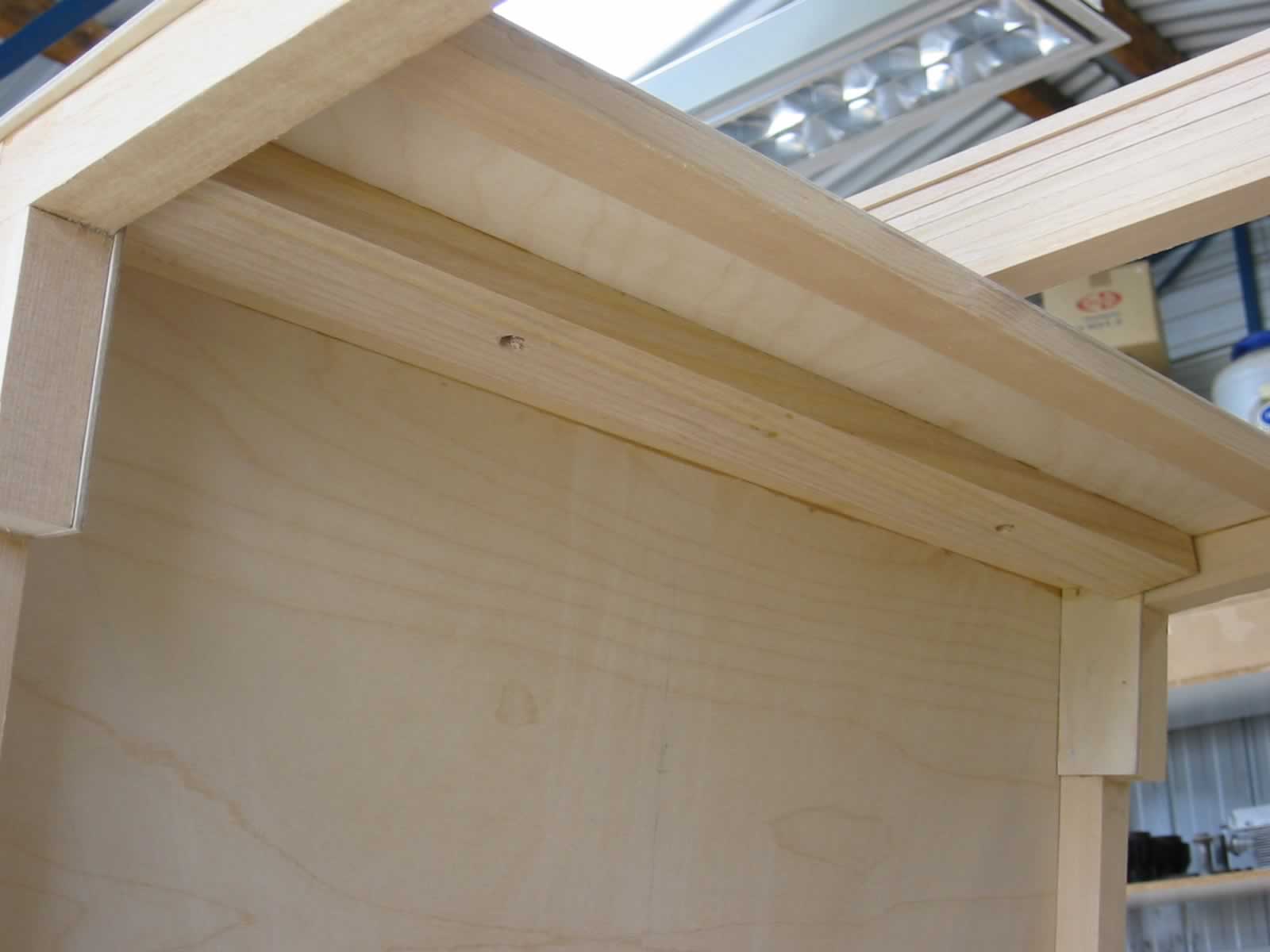 The underside of the shoulder harness fixing 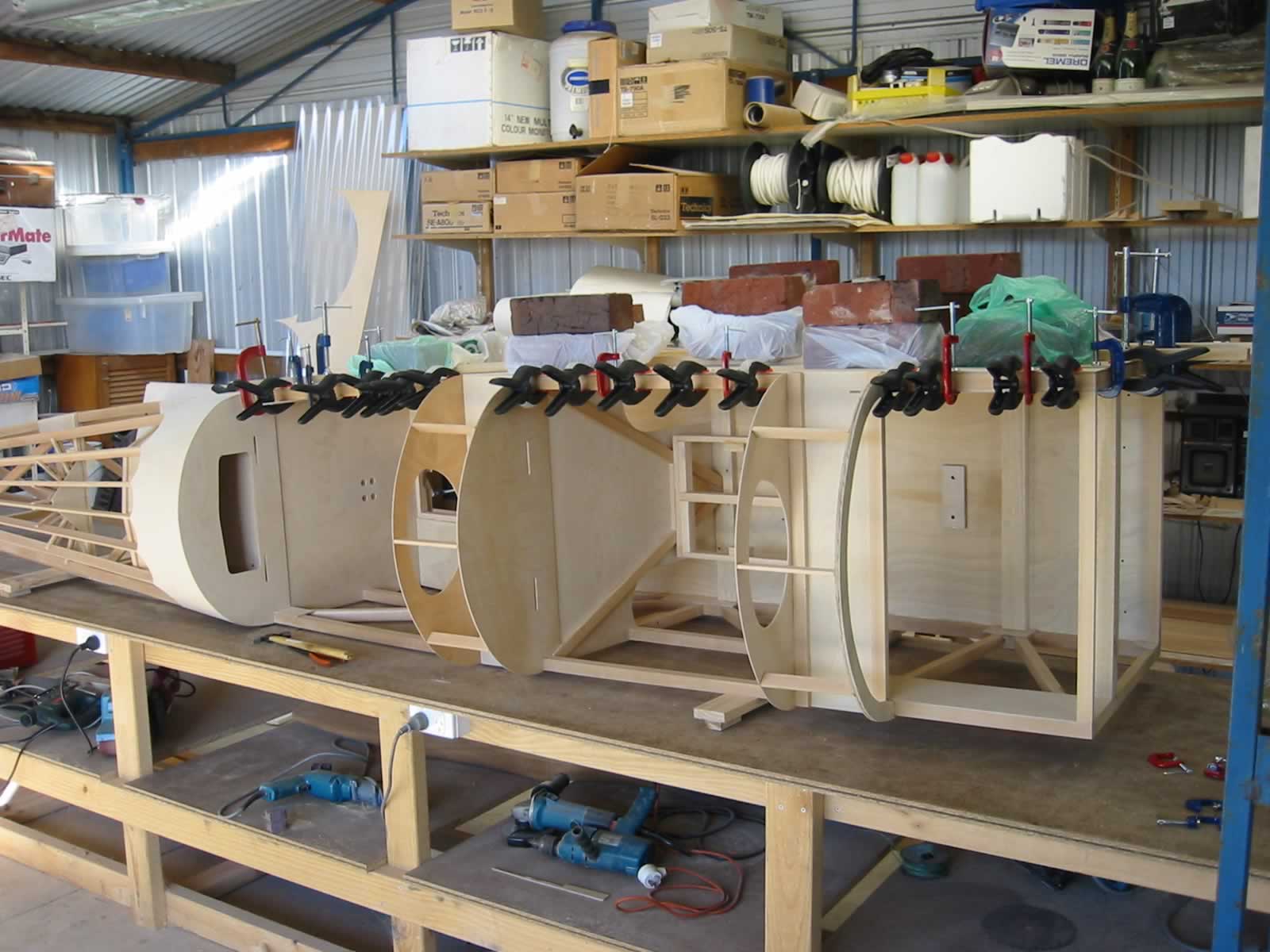 Using bricks to help glue the sides to the fuselage. Notice the cowl supports/cockpit panels are already in place. 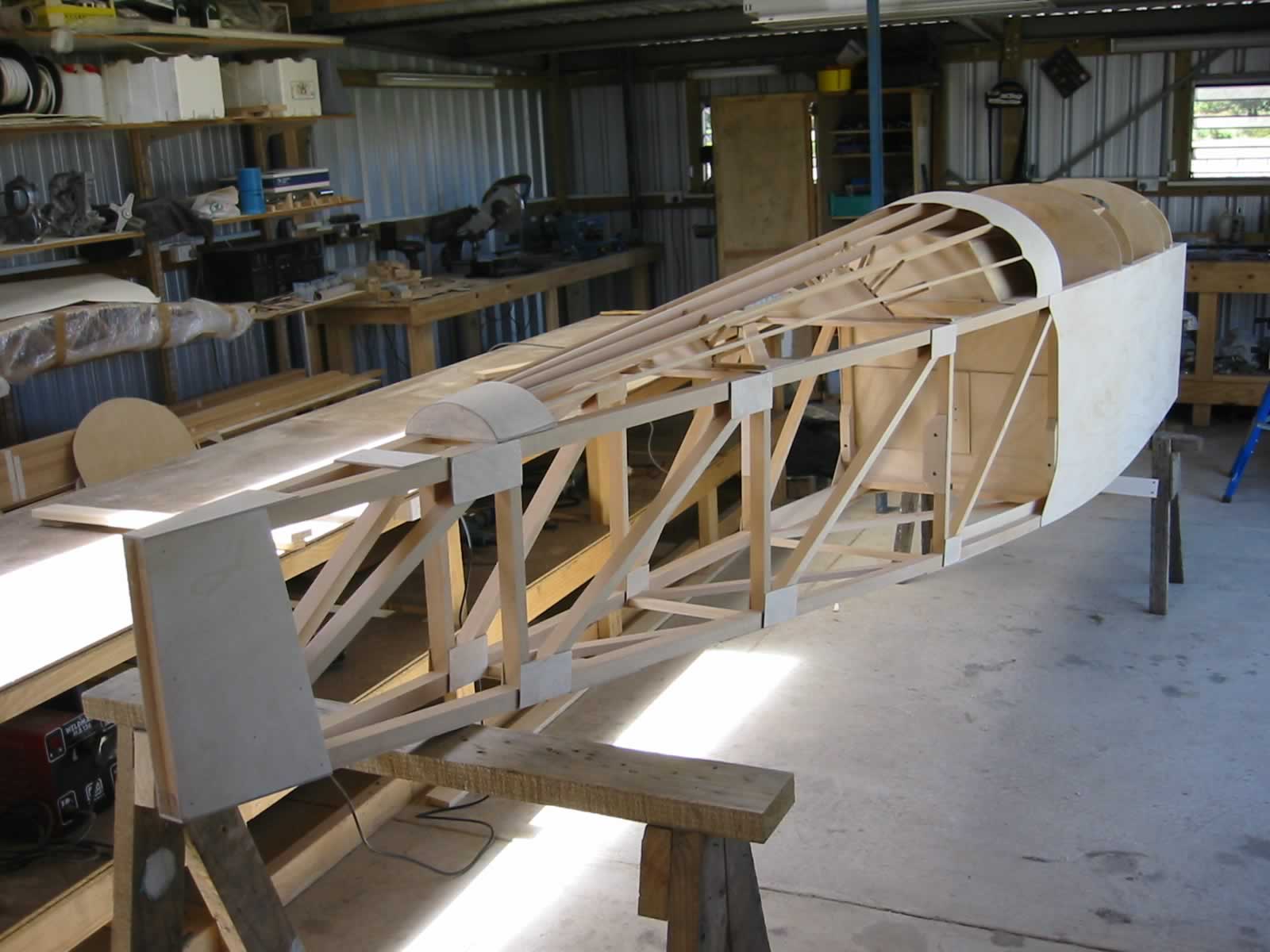 Boths sides glued. All left to do now is the side stringers 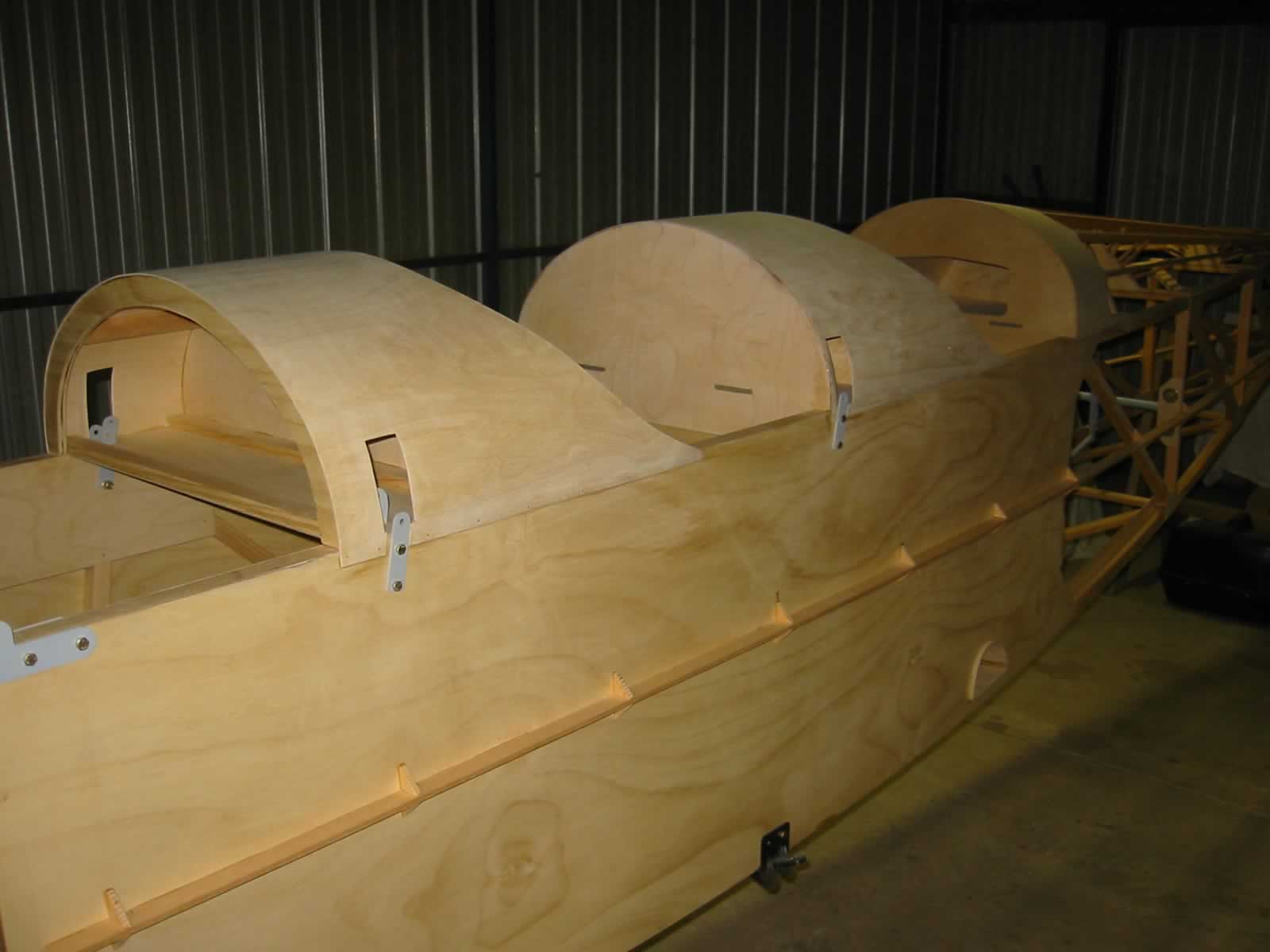 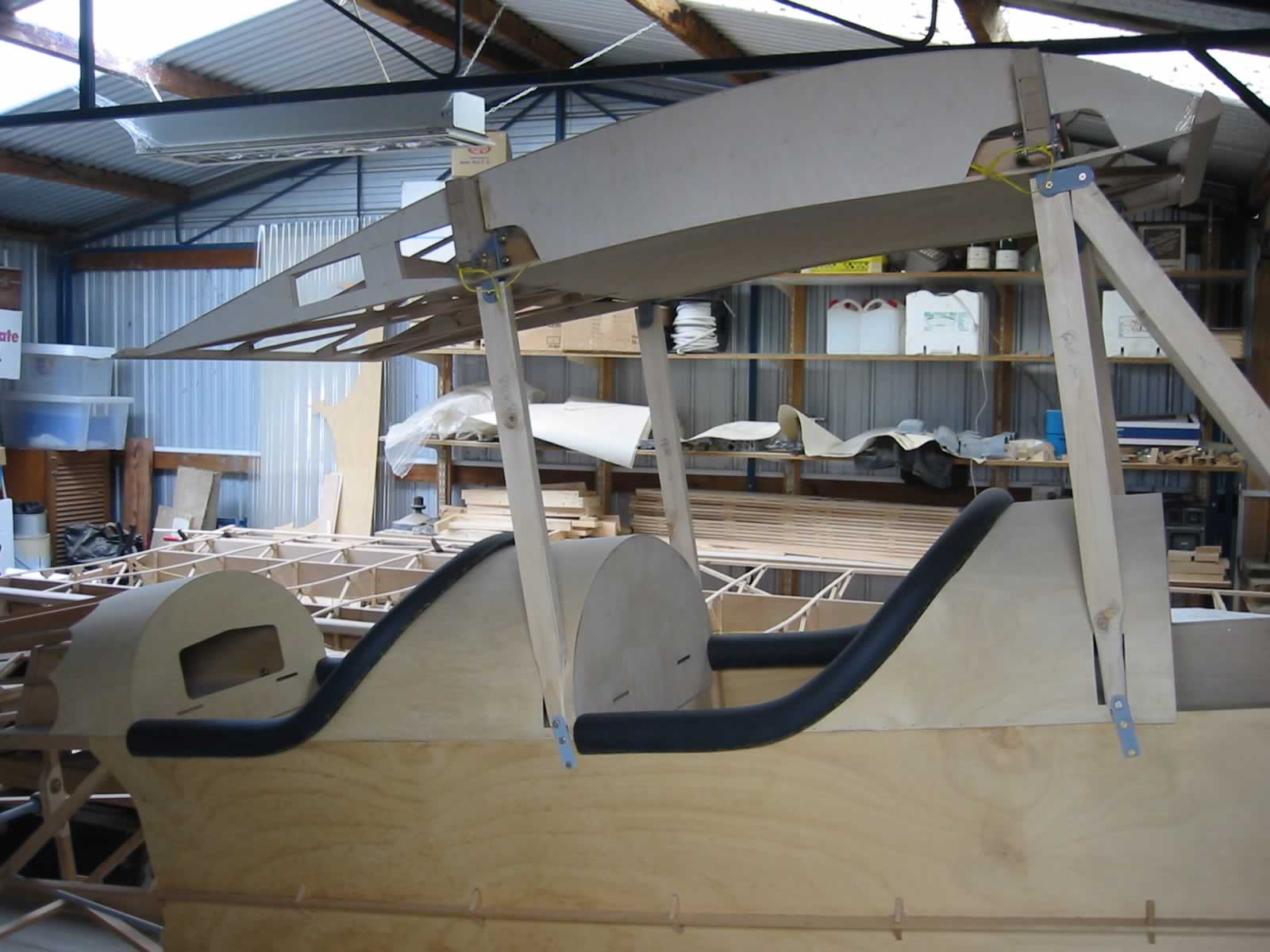 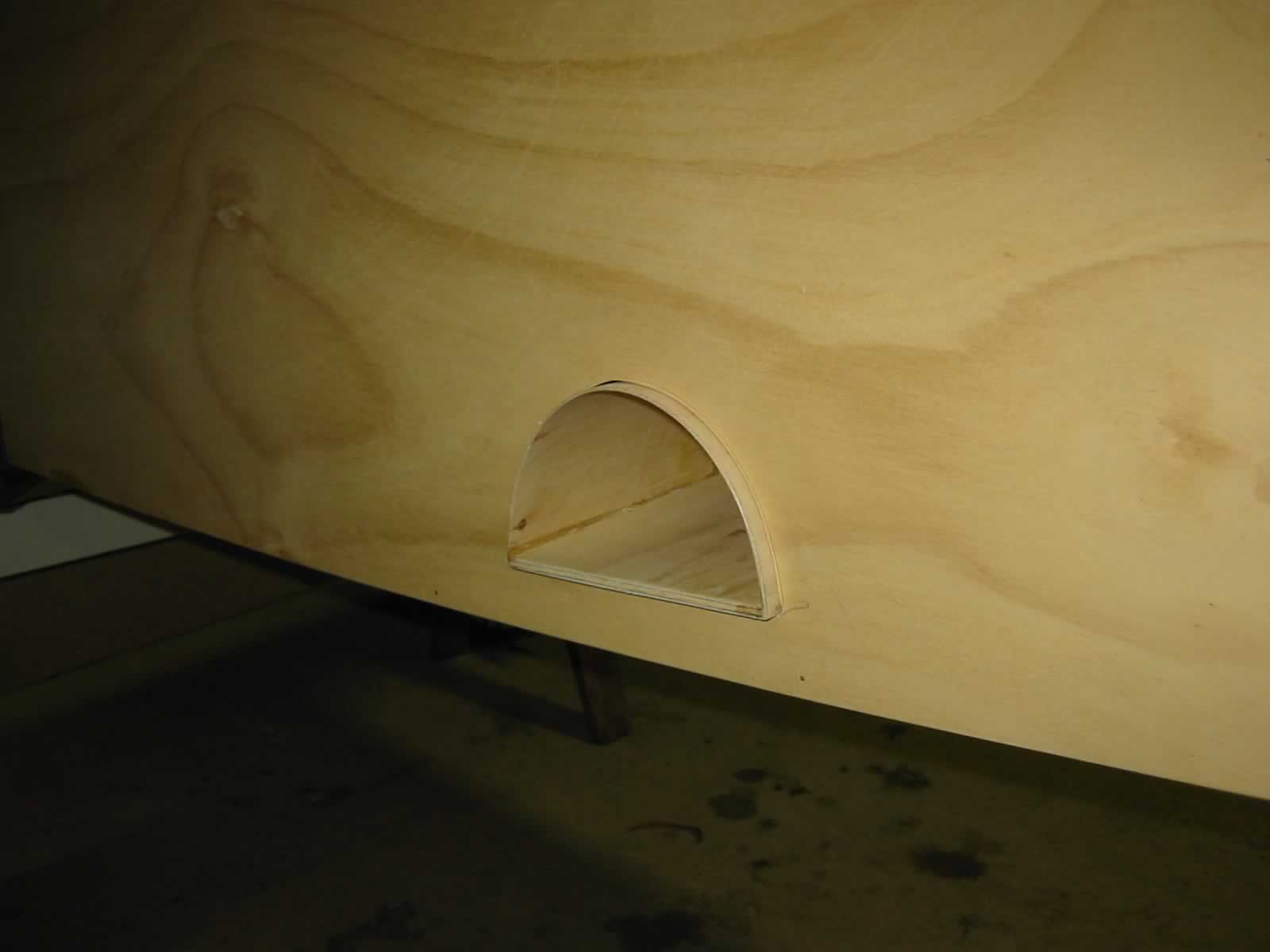 Side step installed (not yet glued in place). Be careful to leave enough space for the rudder control cables! Underside of side step (not yet glued in place) First Cockpit instrument panel installed. I then worked out that I needed to bend the panel to install it in place. Difficult to do with all the instruments installed. I rebuilt the panel and can now install all the instruments, wire them up and then fit to the fuselage. Much easier. Panel fitted and wired. Still needs a coat of varnish and the aluminum polished (swirled)

A mock up of the cowling. The cowling will be made from aluminium. I shall attempt to round the edges on the front prop line